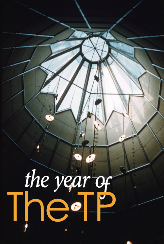 In April 1889 the Unassigned Lands of Oklahoma Territory were opened to all adventurers who would stake their claim to 160-acre tracts, “free” land for all, in the commonly called Oklahoma Land Run. C.E. Pauly was among them, a rugged young settler on horseback, who rode across the southwest corner of prairie now identified as 178th Street and MacArthur Boulevard, on the western edge of Edmond. While other claim seekers moved on to find their futures, Pauly headed to the land office in Kingfisher that day to secure his.

In the years that followed, Pauly and other settlers had no central meeting place for religious activity on the prairie; they met in homes, small schoolhouses, or any place that was available. These prairie dwellers decided in 1898 it was time to build a place of worship, a church, and Pauly donated one acre from his claim—that southwest corner—for just that. A boss carpenter was hired for a dollar a day and much of the labor was donated. Once built, they were grateful for that small, wooden-framed church—and when it burned, they built another one like it in its place. Years later the story is told that Pauly’s wishes were that the land should always have a church on it.

As the only church around for eight miles in 1904, the site became a ‘mission’ of then Edmond’s First Baptist Church. The house of worship was named Center Baptist Church, and stood as a landmark even then among 13 one-room schoolhouses on the red dirt prairie. Although Deer Creek School District would later connect the schools in 1921, the area was called Dillonville Corner at the turn of the century, with its own tiny store across the street from the church.

Farming was the heartbeat of the community and as the population grew, so did the congregation. Thiinking they might find architecture students to assist in planning, deacon J.L. "Ike" Thomas, a city oilman, approached  the University of Oklahoma's head of the School of Architecture, professor Bruce Goff, with an idea about a concrete block building. Goff helped them instead with a design that would someday be called "the most unusual church in America."

The first blueprints in 1947 revealed a tepee-shaped church, symboling according to Goff, the energy of a young Oklahoma--a tall tepee design held up by surplus welded pipe trusses from the nearby oil field, and walls of nearby native Calumet stone. It didn't take long for Thomas to get togehter some of the "faithful old boys" and begin the work with 1,000 tons of steel pipe. Working long after dark on weekdays and weekends the congregation quarried the stone, welded the pipe and built it with their bare hands. "I don't guess any of us had over a high school education," Thomas later noted. They named the twelve trusses after the apostles, calling the last one Judas because "it gave us the most trouble!"

The last of 12, 8-foot triangles of glass formed the peak of the interior and the placement of the bell tower completed the work in 1951 for a cost of $10,000 in materials. Although the congregation enjoyed it for many good years, the building had problems heating and cooling the large interior roof space over its 300 attendees. The roof eventually leaked due to design flaws in the flashing, and interior paneling buckled and rotted. Later, the sanctuary ceiling suffered bird, termite and roddent damage. Asbestos, added in later years to address heating and cooling issues, was destined for removal when outlawed as building material. Without funds to renovate, "the most unusual church in America" as architects called it, close its doors in 1989, and the church shifted all activities to another building on the property.

The dodecagon on the prairie studdenly stood silent and empty, its once hallowed spiritual experiences and artistic inspiration hushed. Until now. This tepee is ready for revival!